I recently came across a mobile game I feel has done tremendous research into social interactions within the scope of mobile gaming: Unison League by Ateam Inc. The entire game seems to revolve around making and playing with new friends and they did a really fantastic job of it.

There are so many conscious UX decisions to encourage social interactions I decided to write an article of my analysis rather than brief posts in my Psychology in Mobile Game UX Design Pinterest board. 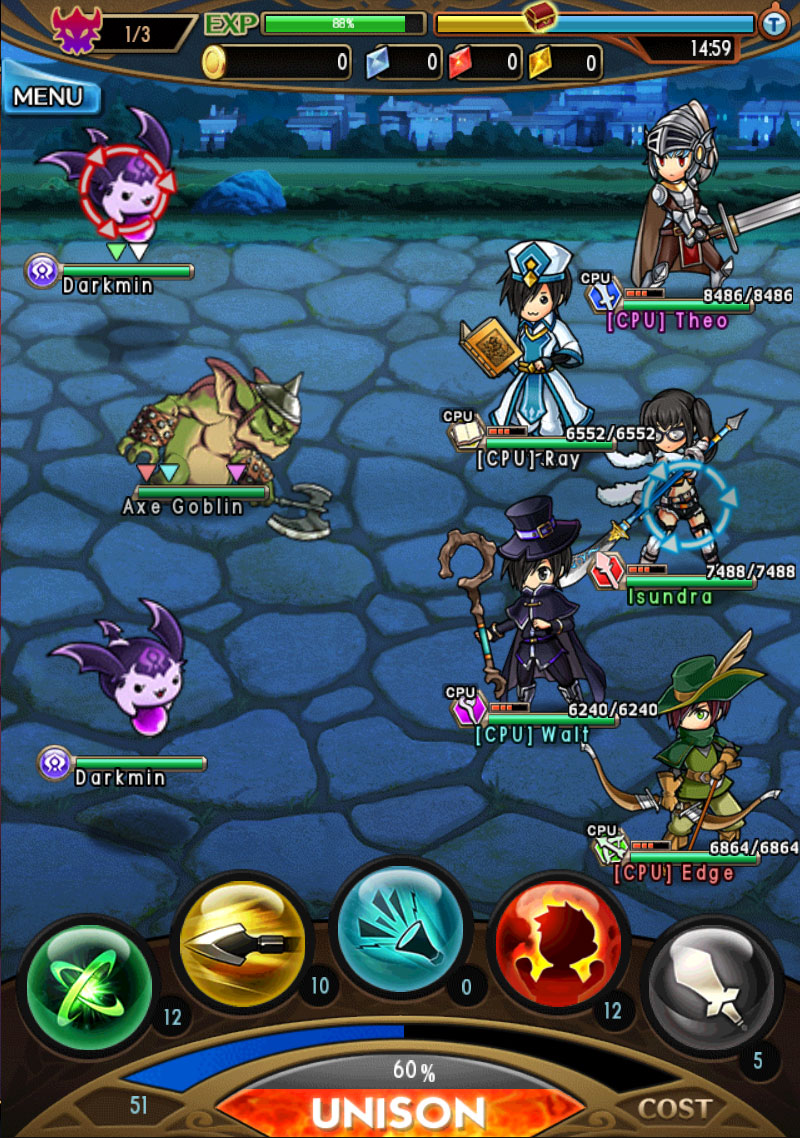 At the beginning of the game, before you’ve acquired friends, the game generates CPU controlled characters to help you battle. I missed the appropriate screenshot, but early on in the game the CPU characters are very similar to your player character. Hair, face, armor, helmet and weapon are customizable in this game. There was an instance where a CPU looked exactly as my character, with the exception of slightly different hair color. I feel that the CPU’s could be coordinated to look like the player on purpose; this could increase the player’s early feelings of belonging to the group, fitting in with the crowd. Being accepted by the majority is extremely important in creating an environment for social interactions. 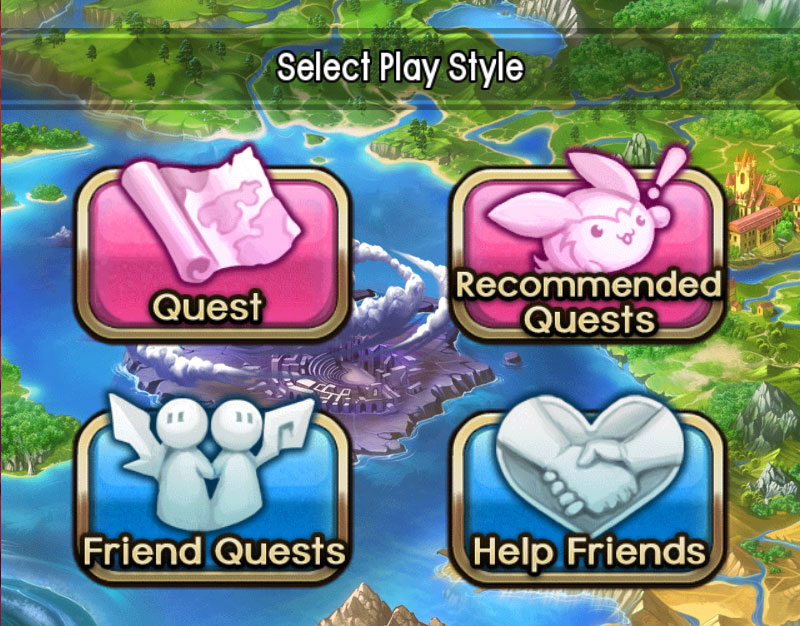 When selecting a quest to do you’re presented with these four buttons. Visually the Recommended Quests button is the most appealing; it has a more exciting color, a smiling character and an exclamation mark. It isn’t very clear what the benefit of doing Friend Quests is over normal quests, even after trying them both, so I don’t know which is more beneficial to the game designers. During friend quests, your friends characters are CPU run a-synchronously , and auto leveled to your level, so there’s no tactical advantage. The Help Friends seems like it might have the priority here as it sometimes receives a red alert bang to show that that synchronized play with your friends is available, I probably would have made that button the most appealing. 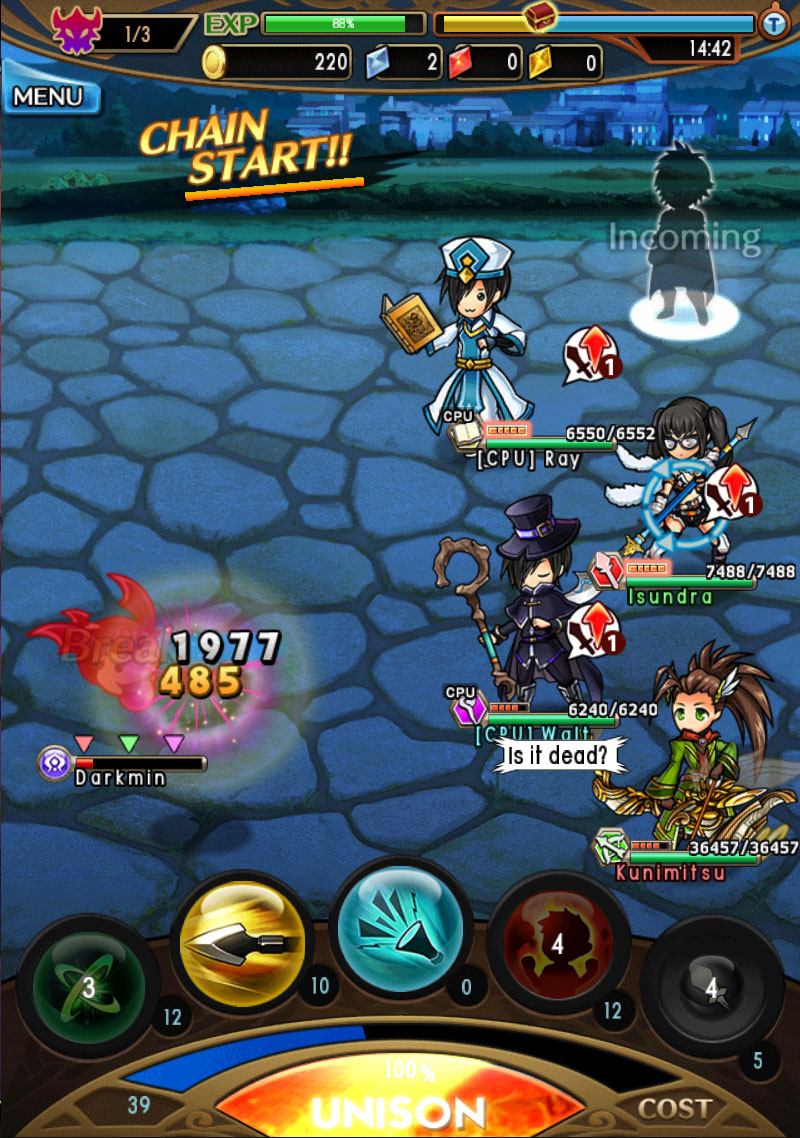 Upon joining synchronous combat you’ll see an Incoming ghost character. I like that they chose to notify players like this so they’re aware that an active player is joining their fight. When I know that someone took time from their own game play to join me in my efforts, I’m pretty likely to return the favor. There is an advantage to doing so, it costs half the action points to help someone, and it can count towards your own story progression. There is a disadvantage to this play style however, since you’re joining mid combat, you can miss some experience in combat that’s already happened, and rare monsters that may have already passed by. It’s acceptable though since you can repeat any previous quest. 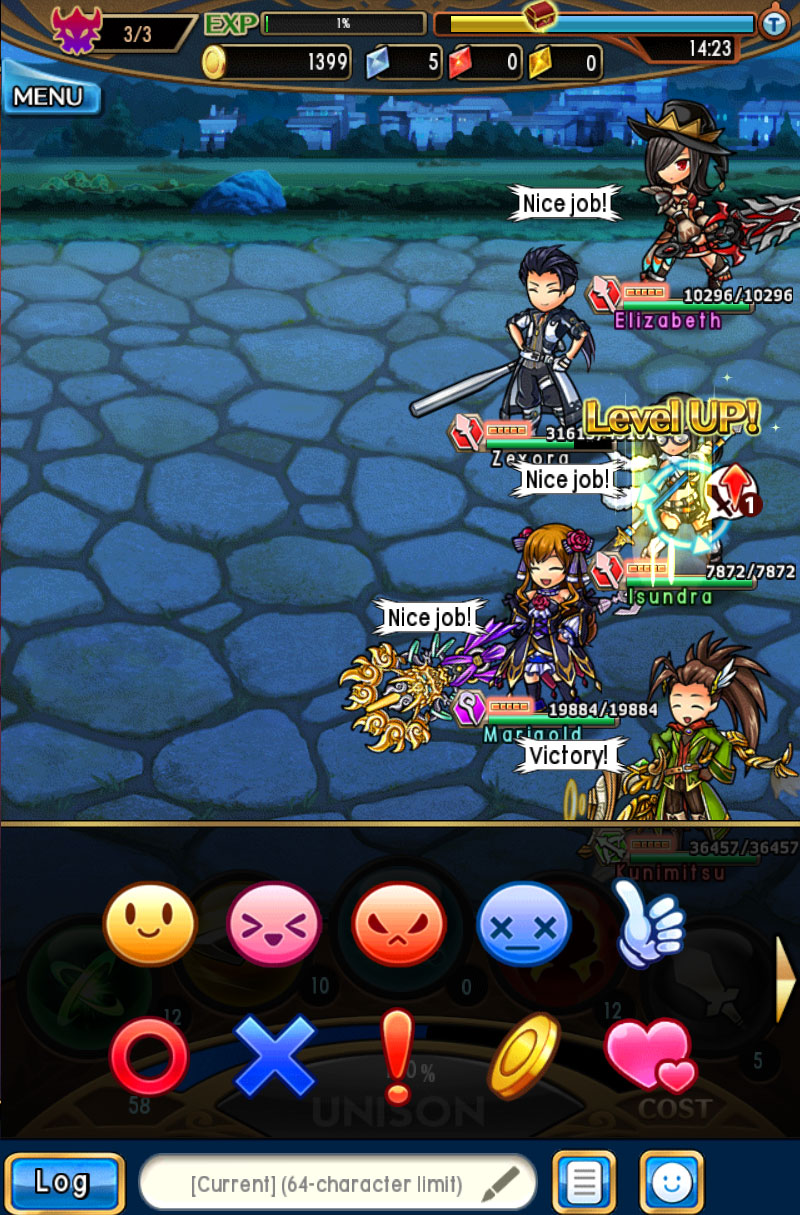 During combat, a 64 character limited chat box is ever present. You can also perform emotes from this area. The chat messages typed in by players show up in speech bubbles in front of the appropriate characters. This creates a feeling that the characters are talking to each other, rather than the players. In a role playing game such as this, players often mentally place themselves in place of their characters. These speech bubbles really create a deeper player immersion, and strong attachments to the other characters that are speaking. Game play is pretty fast, so the designers have also created automated bubbles that pop up in front of the characters with generic messages like “Nice job!” in effect keeping the conversation going. 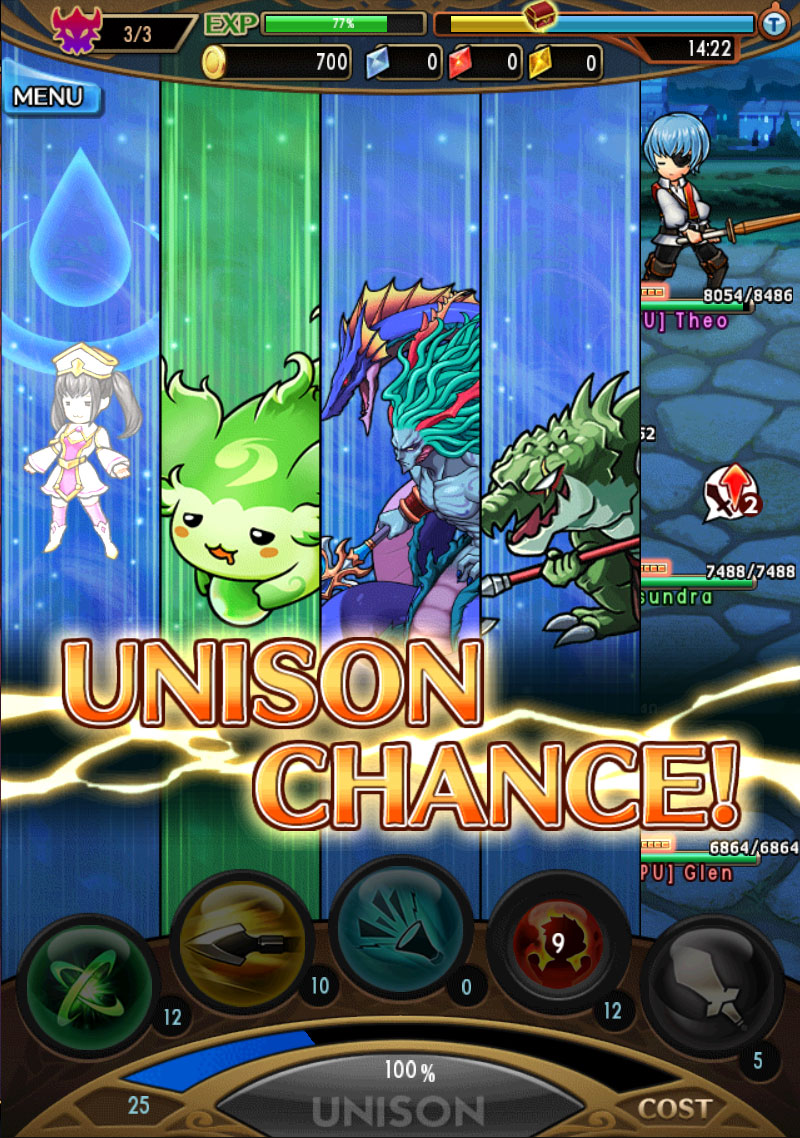 The Unison in Unison League is derived from the most prominent button in the combat UI. The Unison button slowly fills during combat, and each character has a tiny red unison status bar above their health bar. On pressing this button, combat is paused and a cut scene is played where each of the characters’ pets performs an attack, ending in a final unison attack comprised of the pet’s elements (like a giant water attack). This action is synchronous with active players, the more players that participate, and activate the same element, the more powerful the combined attack. Anyone may initiate a unison attack. This is where real combined efforts shine as it’s up to each player to have equipped and activate the same element. Players are more likely to maintain friends that actively participate in unison attacks, as it provides a significant tactical advantage. 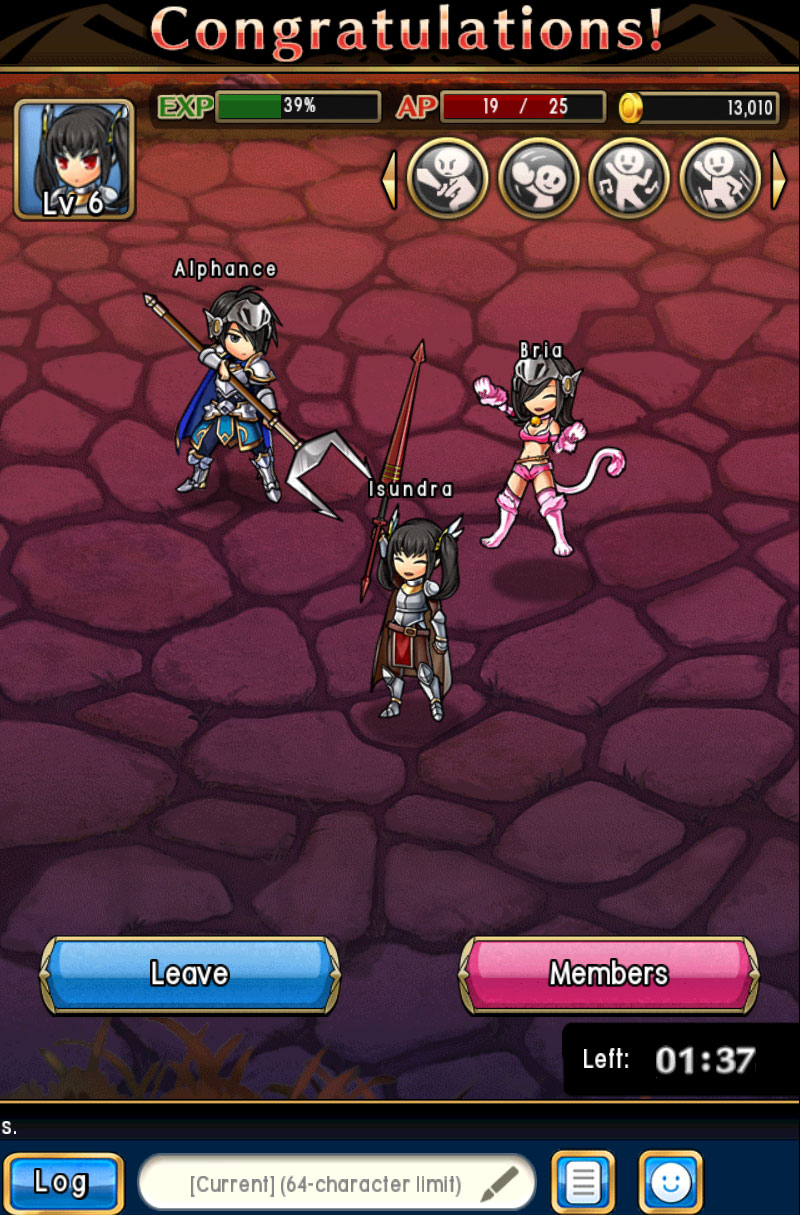 After combat, provided that other players joined you, you’re put into a temporary victory lobby with the participating players. This gives you a chance to celebrate your victory with your comrades. You can of course write short messages. You’re also given emote buttons at the top of the screen to make your character dance around and do fun things. Time spent in this temporary lobby is limited to 3 minutes. This allows for some great direct social interactions, while creating a demand to form a more permanent connection by limiting the time available. Also here’s a great place to jump. There have been a number of studies on the act of jumping in games, particularly in Mario and World of Warcraft games. It’s interesting that a game like this went out of their way to make sure players could jump when there is no tactical advantage to doing so. 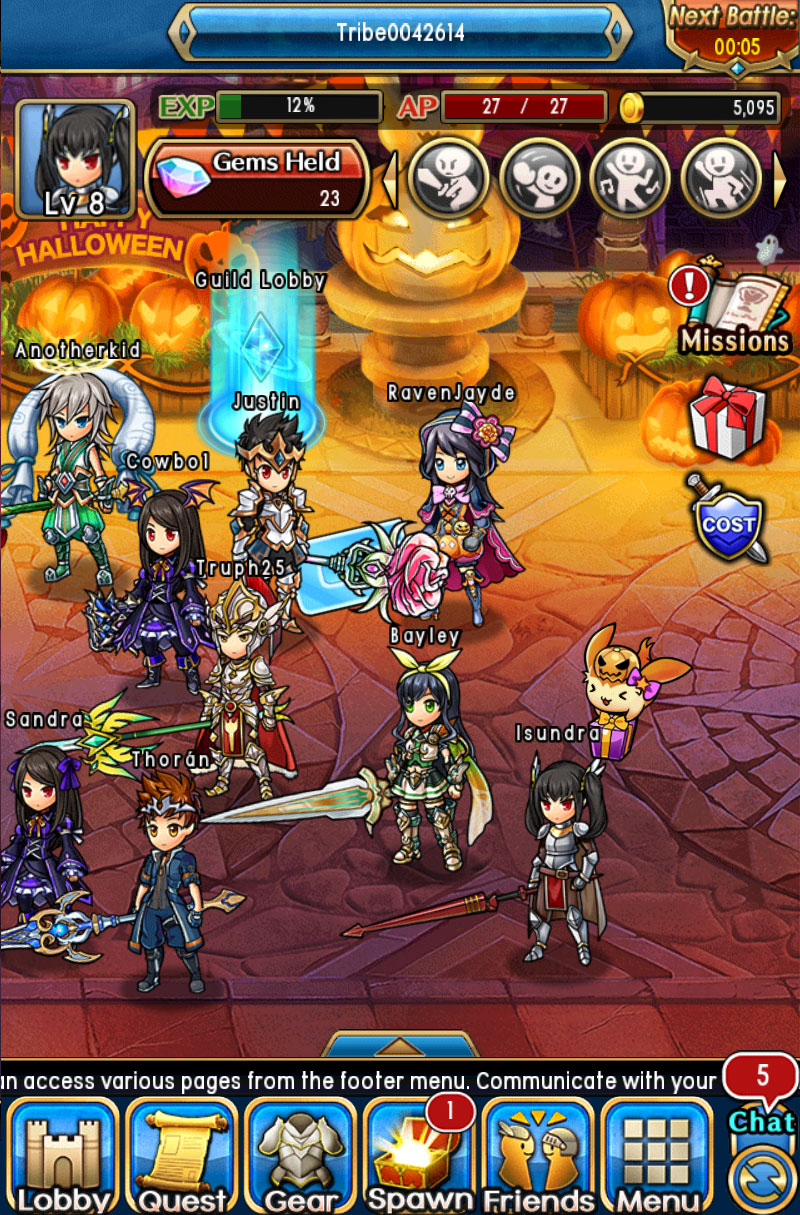 There’s also a Guild lobby where characters that are not actively in combat are placed. The same emotes are available here, you can tap and hold on other characters to see their stats, and initiate friend requests. It occurred to me that these characters too could be artificially generated, and made to auto accept friend requests but not reply to direct interactions. Many players could act in the same manner, and it creates a feeling of a popular game. This lobby is also where you can collect achievement and daily quest rewards, essentially driving you to be part of the party.

I’m having a lot of fun with Unison League. The designers put a lot of effort into creating a game where people can make friends. It’s given me some great ideas on how to add more social interactions to my projects.

I had no part in creating Unison League, all credit for the game goes to Ateam Inc.