We placed 4th in Ludum Dare #41 out of 2000+ games! This post details the process of building the art for our game over 72 hours.

After a lengthy debate over the “Combine 2 Incompatible Genres” theme and various forms of tower defense, we landed on “platform shooter dating sim”. We chose a “secret agent” aesthetic to mesh with our theme combination. We imagined that dating for a spy would be particularly challenging given an overly demanding love interest, having extremely sensitive windows in which to answer text messages.

For jams, I like to tackle easiest things first. I find that I’ll have ideas about the more challenging visuals as I’m putting together simple pieces. The phone was actually the easiest part for me so I ironed out the details of that interface before we broke for the first night. I threw in “Spyrizon” as a nod to the spy theme. We found later that the fonts weren’t working well as the phone shook and rotated. Unfortunately, by that time it was too late to experiment with substitutions.

Next, I tackled our hero. I initially had an idea that our hero would be a classic Dick Tracy type with a big hat. This didn’t align with the team’s idea for the game and I shifted the hero towards a modern James Bond spy. We wanted to put emphasis on the hero’s face, he didn’t have a hat anymore so I gave him a big ridiculous hero chin. His chin became an anchor for his animations and I placed emphasis on this aspect in all his actions. 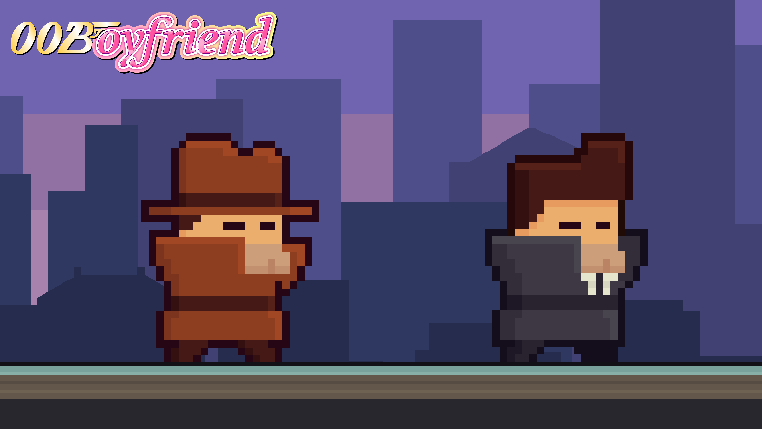 I have an extensive pixel art pallet I built for making games. The pallet consists of luminosity from 0-100 in increments of 5. Then hues are applied on top across the rainbow. From there is a gradient map that shifts the colors towards yellow in the lighter lumens, and towards indigo in the darker. The pallet is then duplicated and desaturated. Then both are copied twice and shifted towards warm and cool tones. Download the pallet here! 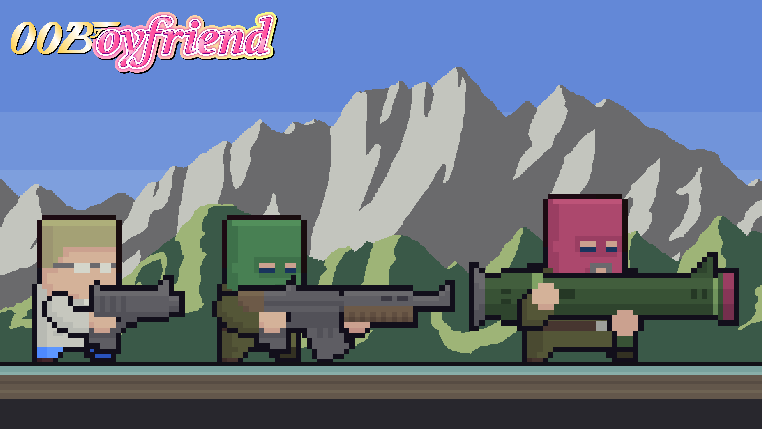 I found inspiration for the “00Boyfriend” logo on the first night and decided that doing my traditional pixel art style and pallet would take too much time and might not do justice to my idea. I whipped up the logo in the morning and ran it through “nearest neighbor” scaling a couple times.

I gathered a bunch of inspiration early on to draw from. I use Pinterest to collect my ideas. The main game was inspired by James Bond & Mission Impossible movies, Metal Gear Solid, Metal Slug, Broforce, Jetpack Joyride, Omega Strike and Gunpoint games. There isn’t much outside of the title but I also drew inspiration from dating sim games like Dream Daddy and Hatoful Boyfriend. You can check out the Pinterest board here!

We decided on aiming for three levels; an office in the city, a warehouse, and a military installation. In a jam this is really ambitious. I immediately struggled with platforming tiles and backgrounds for an office. It was a challenge to figure out how a platformer in an office building would look. Floating platforms and scalable walls aren’t common in a standard business environment.

I pushed through the office on the second day and came up with a half-baked tileset. The warehouse environment ended up being a bit easier. By this time I got a solid grasp on how 47 slice tiles work with Game Maker Studio 2. By this time it was late into the second day. More caffeine! Patrick and I pushed through the night and I hammered out the third level. Having a better idea how to handle 47 slice, I revisited the office tileset and adjusted it to be more in line with the other two. 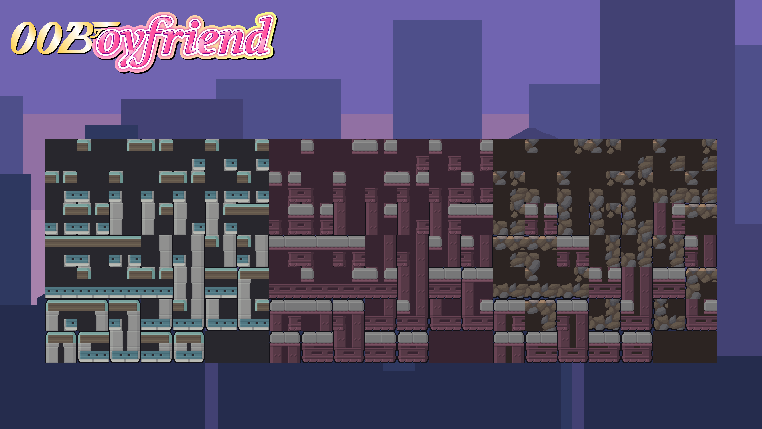 Now that the majority of the game art was covered, I started on background props like desks, chairs, forklifts, water coolers, etc. I made a few love interest sprites and called it a night. I slept about 3 hours and went back at it, preparing screenshots and video for our submission.

There’s a lot that could have been better. I’m glad the art at least feels cohesive. A lot of time got burned on the office art that could have been better spent. I have a good handle on 47 slice now so future projects can go much faster. I would have loved to do big pixel art portraits for the love interests; it wasn’t in the time budget. I had an idea for a giant eel boss (ala Metal Slug) for the end level with only 3 hours to submission, well that just wasn’t gonna fly lol, I was probably just delirious.

Thanks for playing our game! 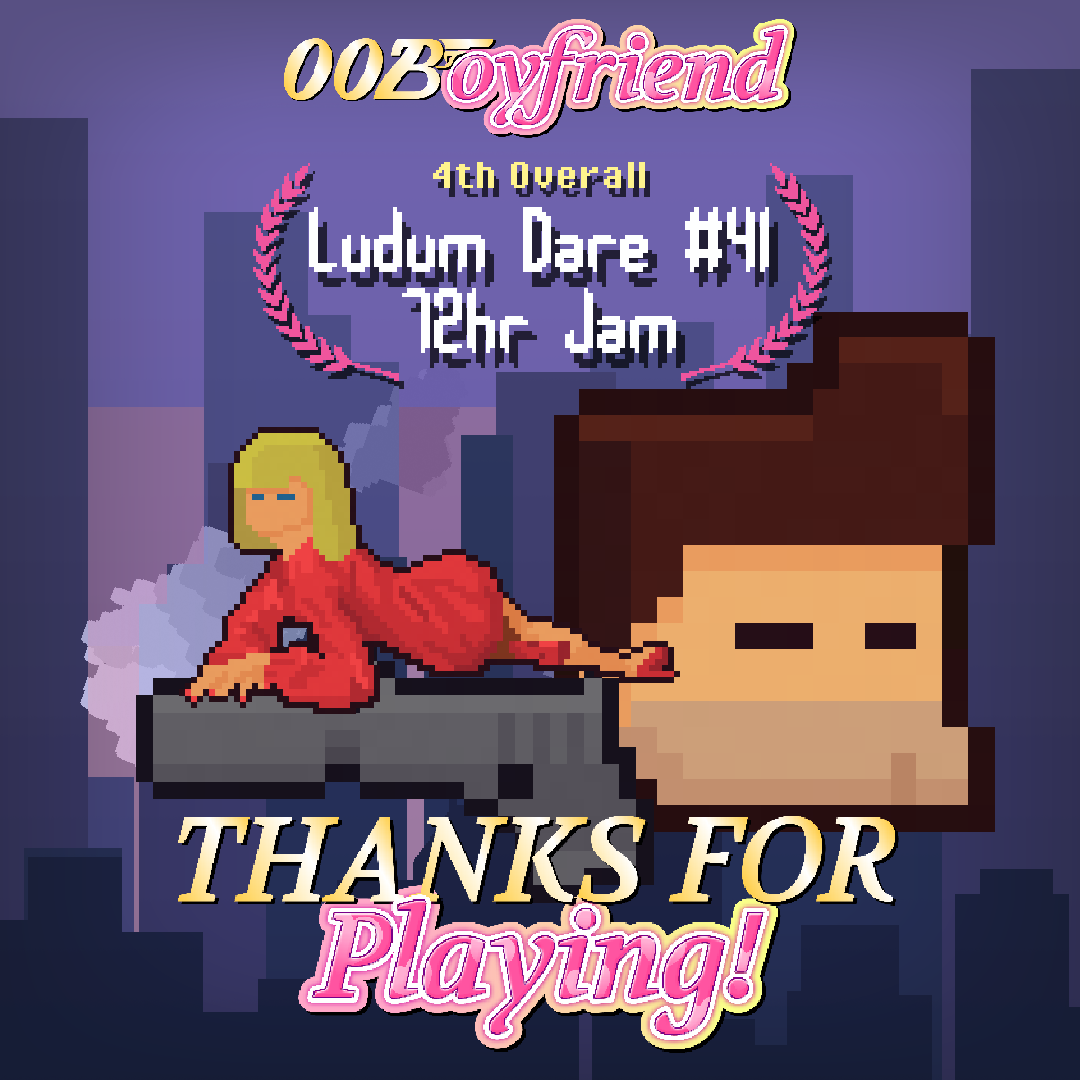